What Is the Difference Between Goodwill Retail Store and Goodwill Bins? 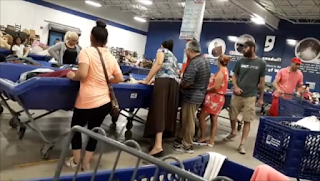 Did you know that Goodwill Industries has stores known as Goodwill Outlets? Regular thrifters refer to these stores as "The Bins" because of the big storage containers or bins used to display clothing. Let me paint you a picture.
The Bins is really a warehouse.--a wide open warehouse full of clothing, home accessories, electronics and furniture. Clothing is sold by the pound. My local Bins sells its clothing for $1.49 per pound.
When you arrive at The Bins, you will see that it is totally different from the Goodwill retail stores. Unlike the retail stores, nothing is on hangers or garment racks at The Bins. Clothing is wheeled into the warehouse in gigantic bins. You will finds rows and rows of bins and people digging through them like maniacs. 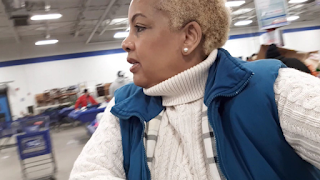 On my maiden trip to The Bins, I was somewhat prepared, but not really. I had heard so many stories about the fights and other drama, so I was ready for anything.
Well, when I arrived, there were people digging in the bins and throwing clothing back or into their shopping carts as if their lives depended on it. I was a little intimidated. I guess I was moving too slowly because people were reaching around like I was in the way. It was wild!
I was watching everything around me. It reminded me of my first day of junior high. My older brothers had told me so many stories about junior high school, like having lockers, changing classes, shop class, and lunchroom fights, that I was hyper-vigilant and scared at the same time. I'm here to report that my junior high school experience wasn't half as bad as my brothers had reported. Thank goodness!
Anyway, after about 15 minutes of sifting through clothing, I noticed a staffer on my row was consolidating clothing into a single bin.  I learned that he was doing this so that he could make room for fresh bins of clothing and hard goods. And this scene repeated itself over and over again throughout the warehouse, about every thirty minutes or so.

MAJOR PROTOCOL AT THE BINS

Here's the clencher. There is one major protocol that must be followed as staff brings out fresh bins. As the new bins roll in, an announcement is made that no one should touch the bins until all bins are in place.  This mean ALL bins.
Thrifters must step out of the way and stand back. This is important to know.
I witnessed a heated interaction between staff and a thrifter who refused to follow the rules.  She began digging in the bins after being asked several times to wait.  It was ugly! She was eventually escorted out of the warehouse.
I don't know if this was her first trip to The Bins, but I'd say it did not end well for her. As for me, I learned a lot that day.
Have you ever been to the Goodwill Outlets? What was you experience? Drop me a line if you can relate to my story.
Disclosure: Links may contain affiliates. When you buy through one of our links we will receive a commission. This is at no cost to you. Thank you for supporting Life on Greenwood and allowing me to continue to bring you valuable content
By Caron at January 31, 2022
Email ThisBlogThis!Share to TwitterShare to FacebookShare to Pinterest

Caron
Welcome! My name is Caron. My blog blends my 30+ years of Finance and Insurance experience in the corporate world along with my love of thrift shopping, lifestyle and all things that empower women. I am an avid thrifter who loves to upcycle home accessories. I love a good thrift find - both clothing and items for the home. I also like to paint furniture. If I thrift it, you can bet that I will paint it!

Thrifted Blazer Favs and How I Styled Them. Style After 60

Here  is a little style inspo for everyone who loves a nice blazer. If it's thrifted, then that's all the better!  I love a good thr...

Caron
Welcome! My name is Caron. My blog blends my 30+ years of Finance and Insurance experience in the corporate world along with my love of thrift shopping, lifestyle and all things that empower women. I am an avid thrifter who loves to upcycle home accessories. I love a good thrift find - both clothing and items for the home. I also like to paint furniture. If I thrift it, you can bet that I will paint it!